Medillin episode isn’t finished but should really come before this…

It was an early start as I needed to rise at 3.30 to get my flight. I’d booked fairly late on so only myself to blame but at least got a few hours in a nice bed which I still maintain is better than a dastardly night bus… but obviously does a lot more damage to the wallet. I sleepily seemed unable to speak spanish but fortunately the airline staff coped. What’s more… I got bumped up to business class for both my flight to bogota and Barranquilla (yes you can go directly if you book far enough in advance unlike me). The flight was pleasant enough despite the hour but I was then struck by the heat as soon as I felt the sun when I left the safety of the airport air conditioning. I was also immediately mobbed by some kids asking for money who then stayed with me for the next 15 minutes or so as I waited for a bus. A taxi driver told me I was being stingy after rejecting his offer and wanting to take the bus (by rubbing an elbow with the opposite hand which apparently means that). Anyway, getting the bus isn’t that tourist friendly if I’m honest but some other dude helped me get the right one. I’m pretty sure I got overcharged by a whopping 50p but was not going to argue.

I planned to meet up with the Medillin group in hotel acuario where Rafa was staying and by some canny bus play was able to get dropped off less than two blocks away which was an absolute result having expected to need a taxi for the final bit. Bridge then turned up shortly after, a good few hours earlier than her sister who had opted for the night bus which was inevitably delayed, followed by Nick who had no such excuse for being late other than being distracted by others in his Airbnb. We cracked on with the first águila (beer) of the day and went shopping for some brightly coloured attire and other festival equipment, namely a cheeky shot cup you hang around your neck with a cord for drinking aguardiente/ what ever else is going round. Quite a clever idea I thought, but I realise these guys probably have all the experience in the world for partying – there’s bound to have been some wisdom developed. It was just nick, Rafa and I that had tickets for the stand today and Bridge was going to chill out a while waiting for Kirsten so we parted ways and headed to the stands/bleachers (balcones). 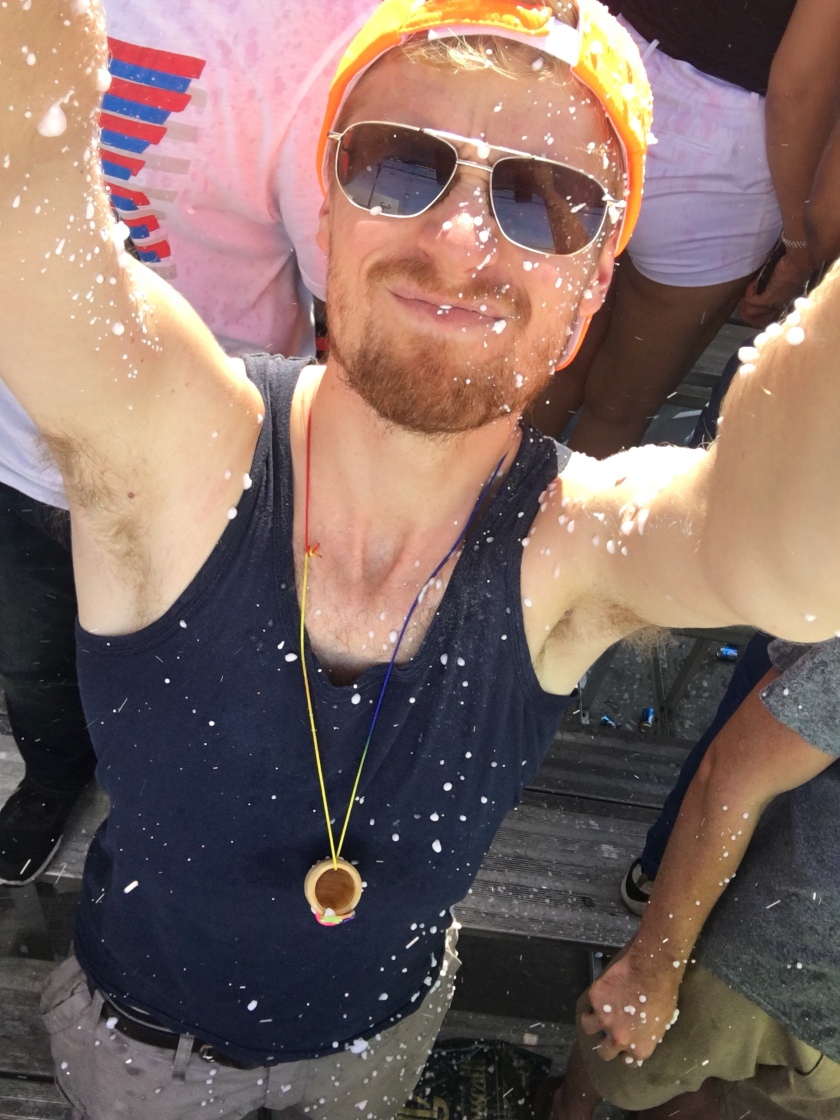 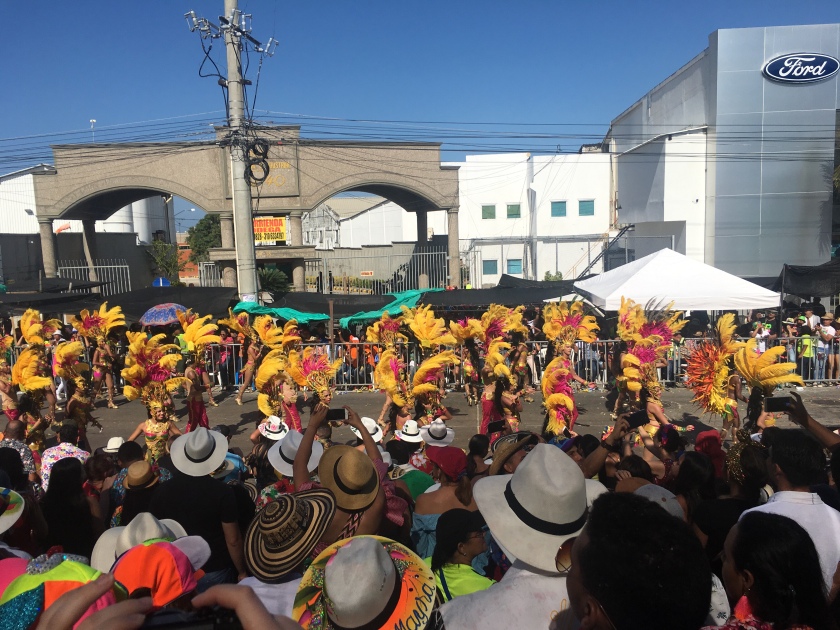 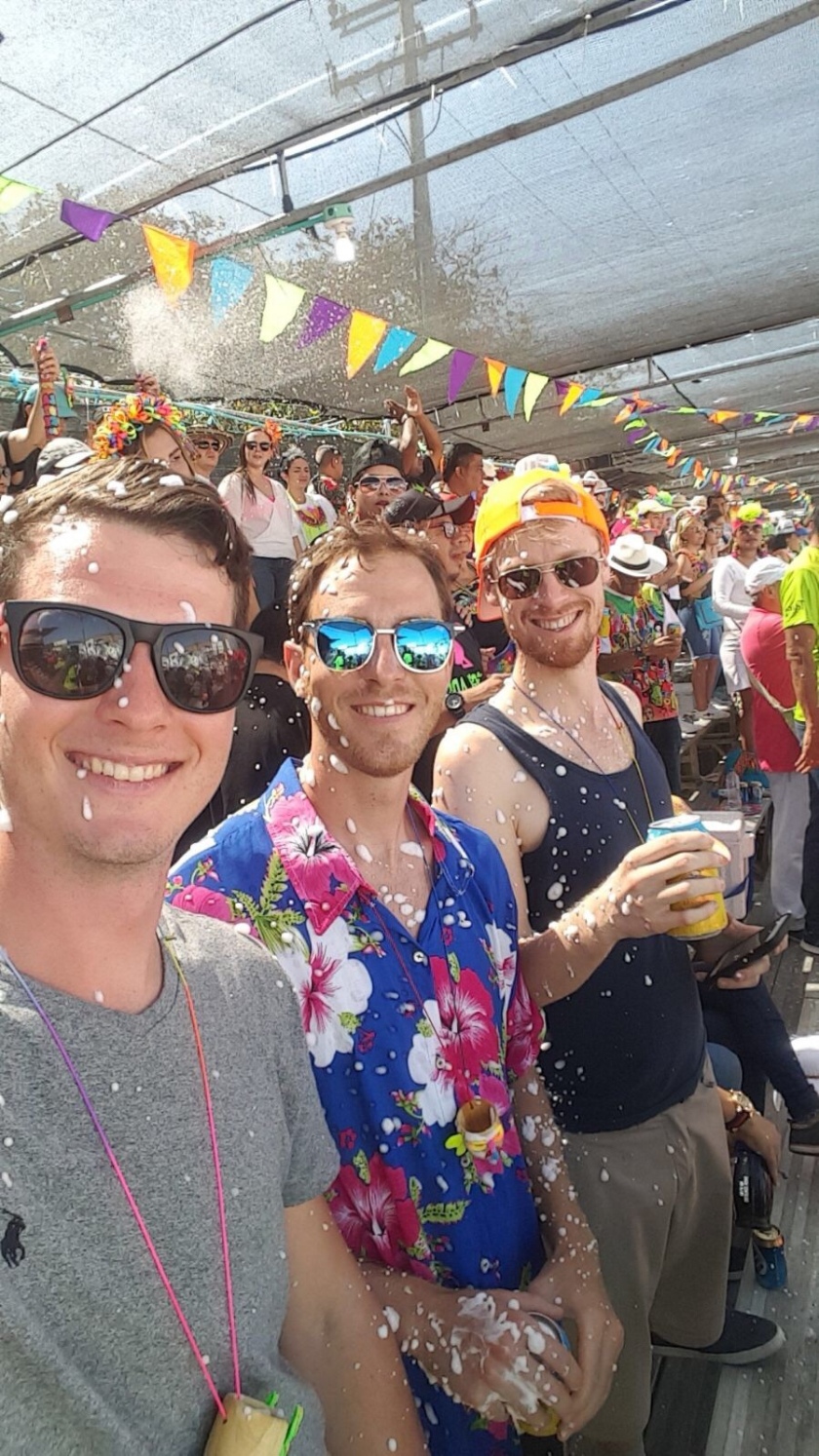 After some apparently deliberate misdirection from guys tauting for other stands that weren’t the ones for Which we had tickets we eventually found the spot and gleefully headed up to take our place spectating the battle of flowers (batalla de Flores). It was awesome, and sorry to anyone from Jersey, but it’s Someone better than the one there! Thousands of people, amazing costumes, celebrities of varying degrees and a cacophony of traditional and current music. Everyone is in high spirits, drinking, laughing and throwing around foam or cornflour… maybe the latter was mostly us but all in the vicinity got involved. Voluntarily or otherwise 😎. There was meant to be free beer *while stocks last. They didn’t last. Obviously and I think we got literally 1 tin among all three of us the whole day… but when a can is £1 and you have a bottle of aguardiente already it’s genuinely fine.

Then it was back to the Airbnb by myself to catch up with the Dutch girls before going for really nice Mexican, eventually being found again by nick and Rafa ahead of us all making our way to la troja (I think that’s name). This is a cool place where the streets are filled with fellow carnivalers until the early hours. We met a load of locals and had a great time, until I succumbed to fatigue of the early start and a hefty first half of my carnival weekend. 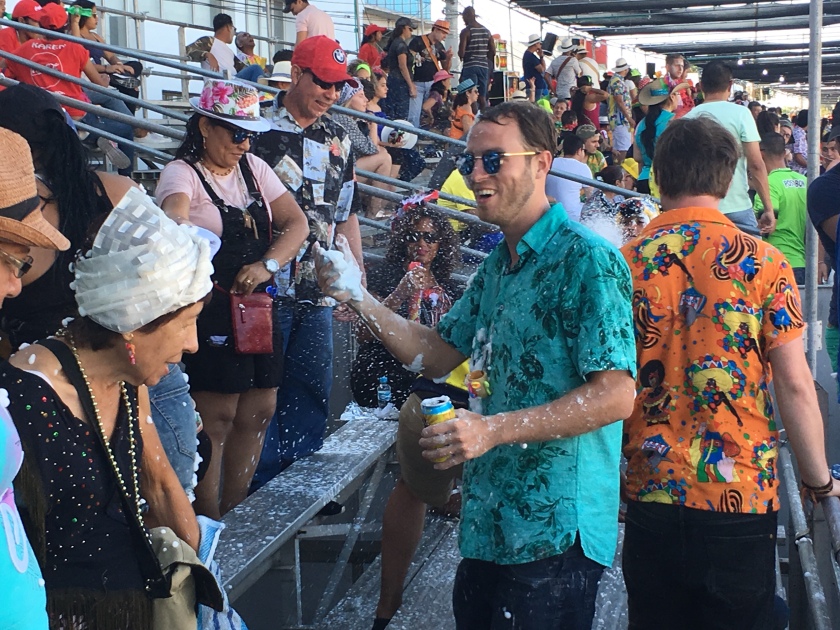 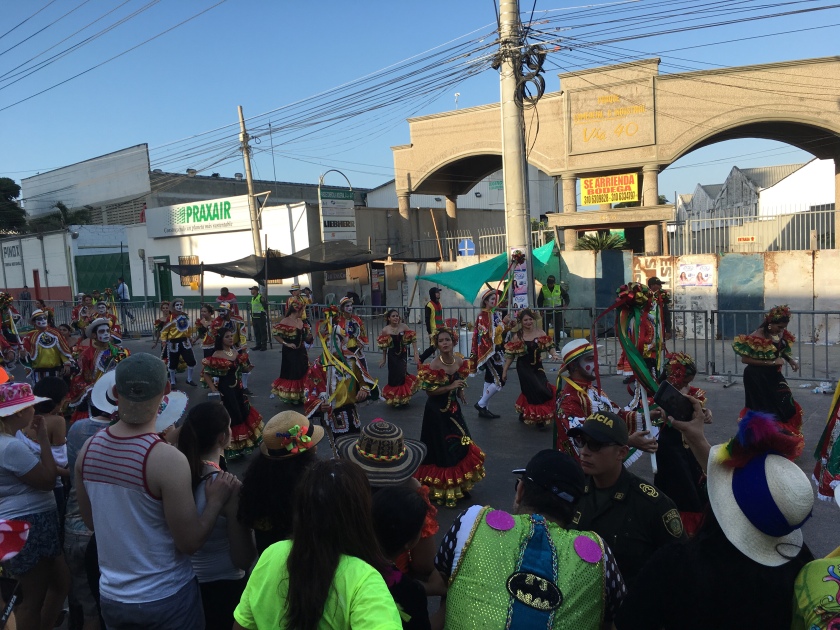 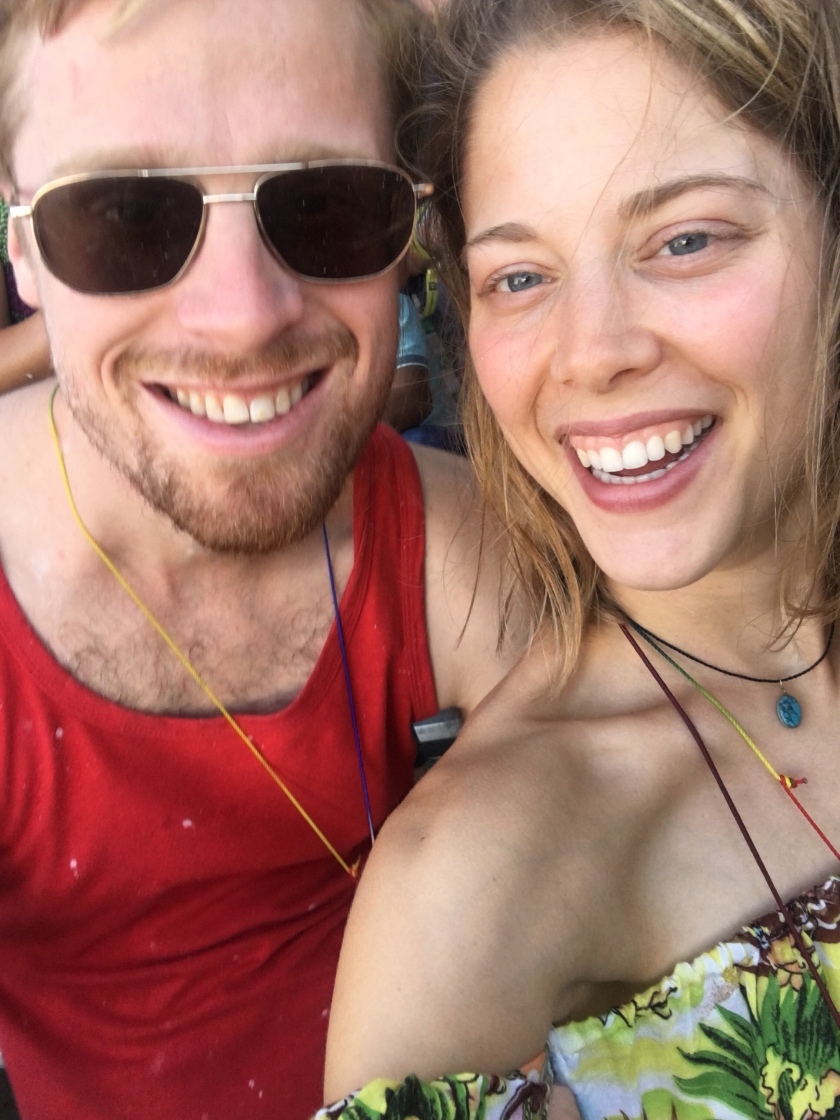 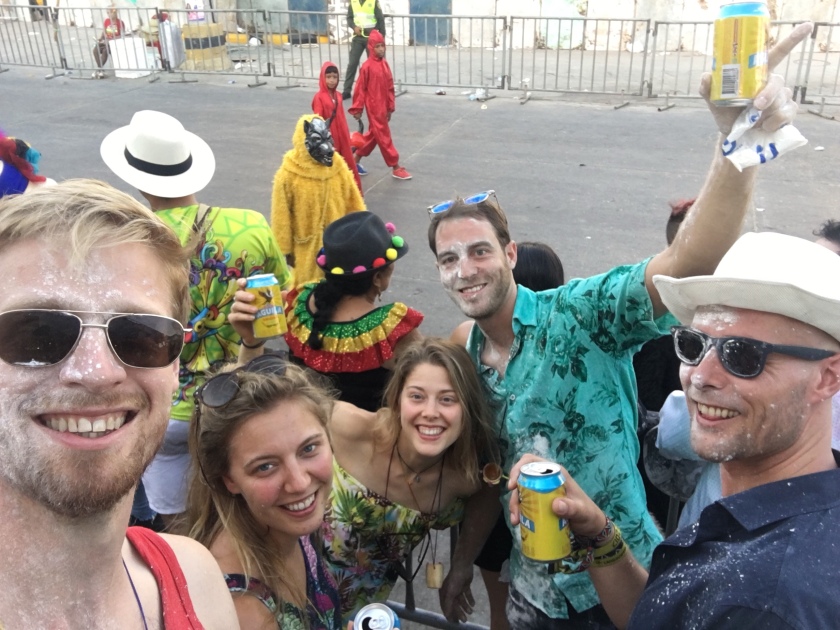 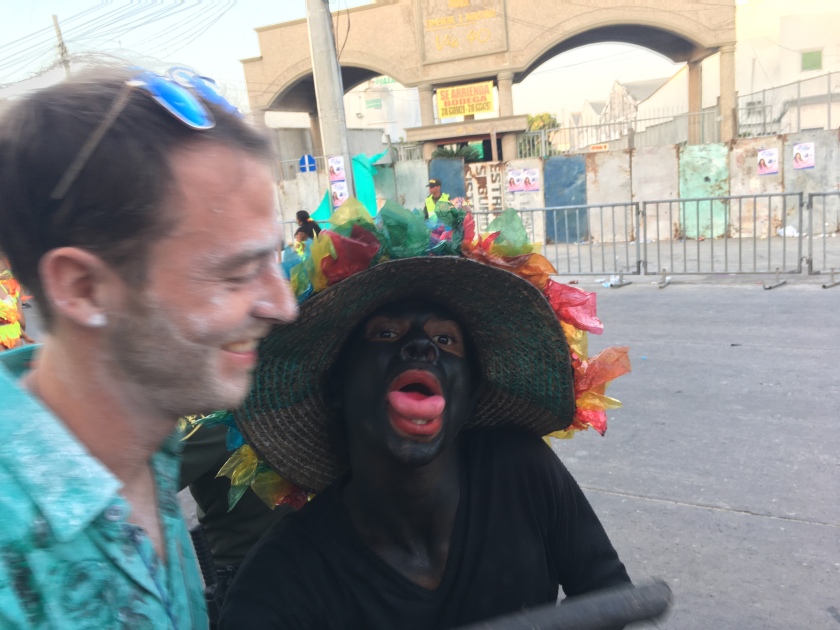 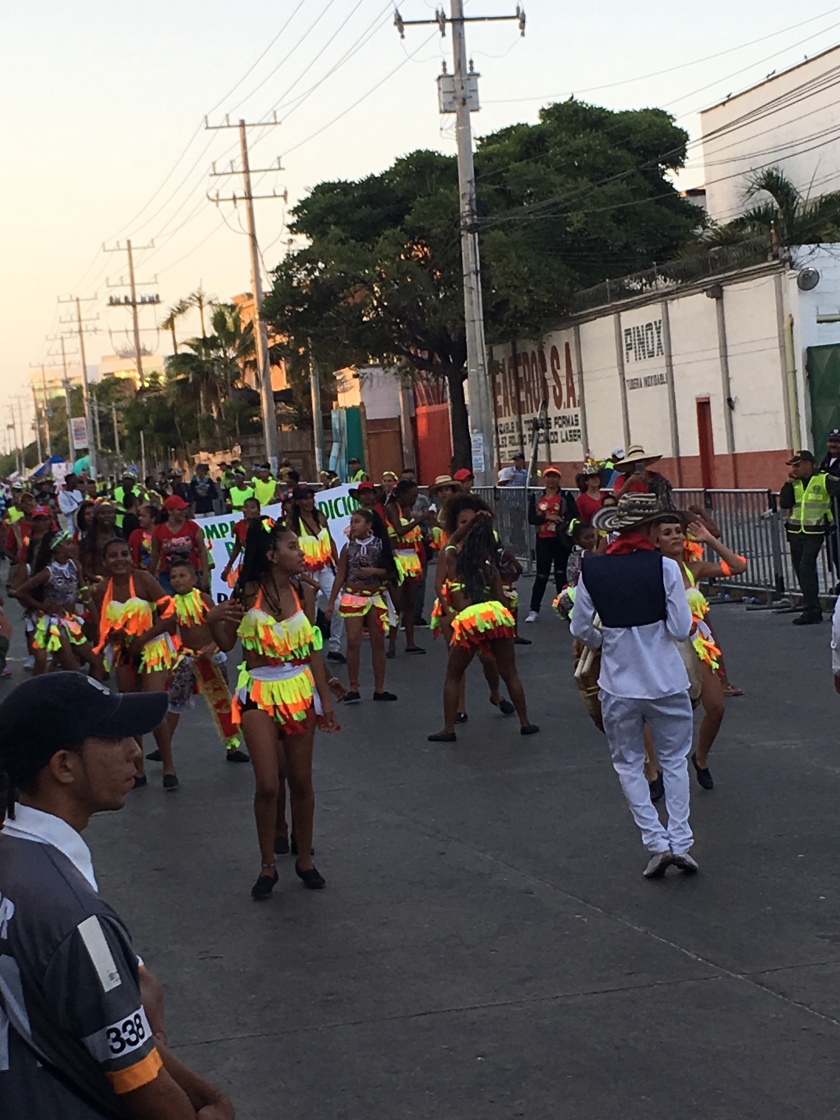 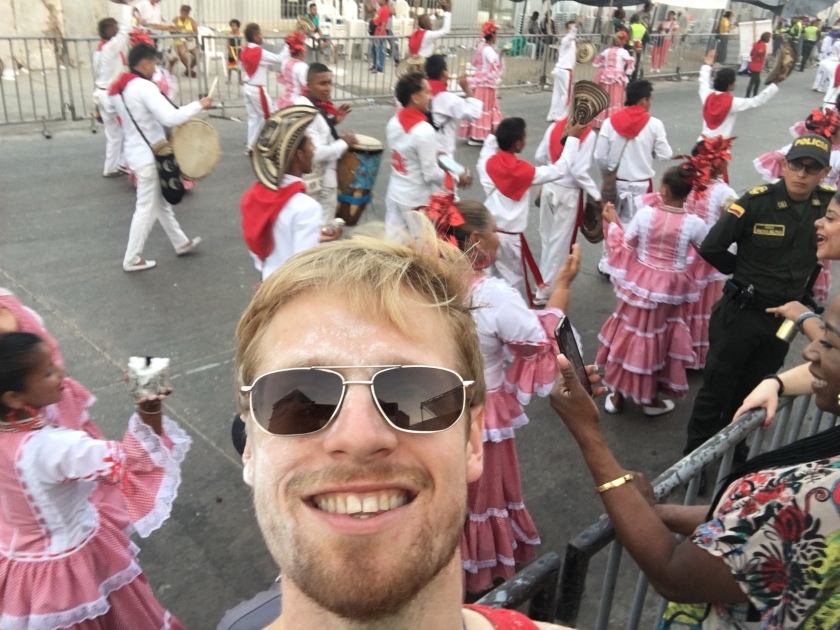 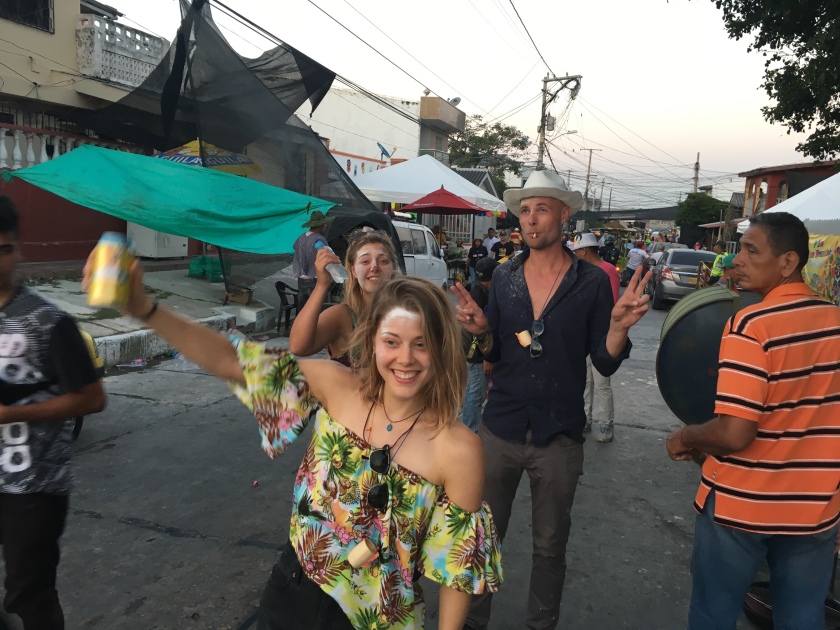 Up and breakfast then next morning surprisingly painless given the partying the night before but we went to bed pretty early relatively speaking which must have helped. I slowly made my way to meet up with Rafael and head into the stands once again, but this time with Bridge and Kirsten. We didn’t hear much from Nick but apparently he had made a new friend the night before so left him to it. We were also joined by Chris who we also knew from Medillin and had an excellent day at the parade. I bought myself some foam and early on and promptly got into a war with a kid who adopted the tactic of climbing beneath the bleachers and surprise attacking from behind. Reinforcements arrived in the form of Rafa buying a bottle himself and giving me a hand… by the time the actual carnival started I found myself with an empty cylinder and soaked! Ah well, another bottle cost little over a pound so no great shakes to reload.

When the parade was over we walked the streets a bit and stopped at an impromptu party where they had a fairly simple but effective speaker set up and no shortage of good cheer. Nick also turned up eventually! By this point it was getting dark and I realised that my prescription sunglasses would no longer cut the mustard. I headed back and pre hailing a taxi managed to stack it and slice my hand on some broken glass… so once again looked a bit of a sorry state trying to get the cab. However, with contact lenses in and rudimentarily patched up I headed back out to rejoin the crew. Some musicians from the parade had joined in and were playing for us there it was awesome! I have a video of a guy rocking out with a clarinet right next to me in the crowd. Everyone was really nice, sharing rum and dance moves (I had a good time failing to learn any). 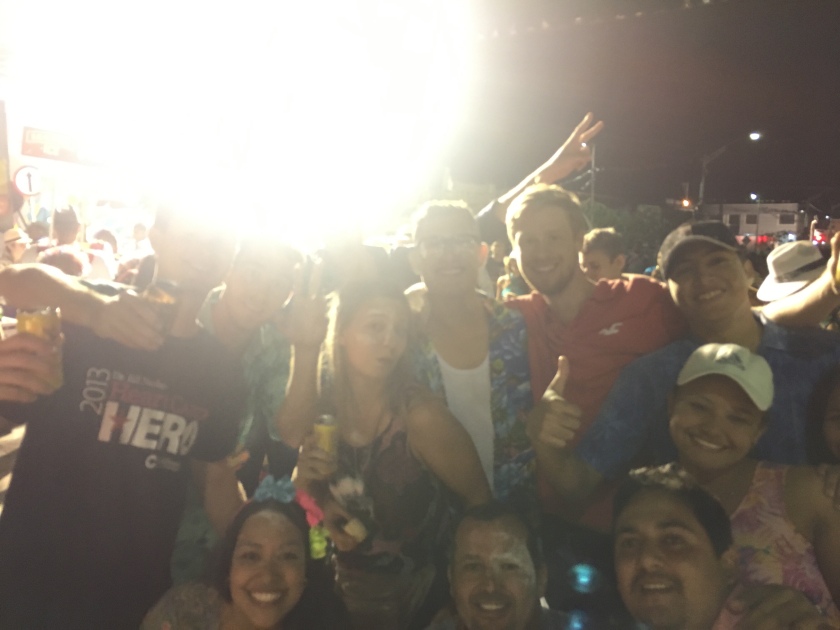 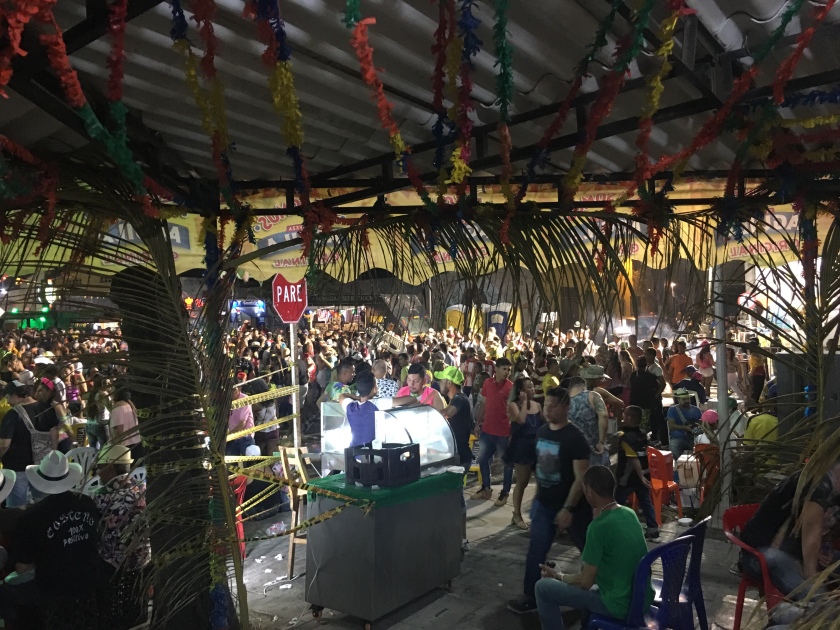 Next we headed to the Main Street party in a nearby part of town. We couldn’t get in the normal entrance and instead headed round the back way which was guarded by police but we got in without too much hassle surprisingly (and without shelling out anything for the privilege!). The party was epic! A huge amount of people there and we met a nice group of locals and danced some more, this time helping them with their aguardiente. 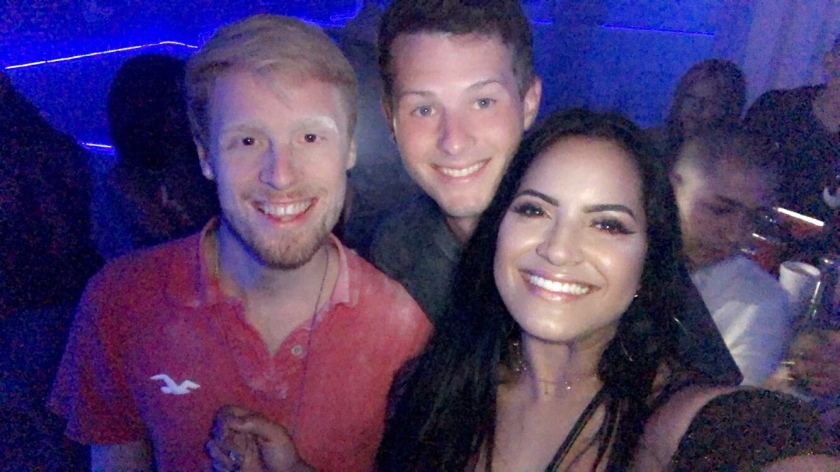 Finally the last stop of the day was a club called barullo another cab ride away and met up with some friends Rafael had made earlier in the day, our number steadily decreasing as one by one people resigned themselves to defeat. Given the state we were in (flour-wise) I don’t know how we got in to be honest. The last of us left pretty late on and I got a taxi back to the Airbnb hoping Bridge or Kirsten would be conscious to let me in! No worries in the end and got some much needed rest.

The next morning was tough, and I shamelessly chowed down on my second maccie Ds of the weekend with relish. Excuse the pun, but it’s genuinely quite cool here – you get to help yourself to variety of sauces and get free reign over the gherkins and jalapeños! We thought about heading to the carnival again to squeeze in an hour or so before our bus left… for all of about 30 seconds and instead opted to chill out a bit, go for a walk and grab a detox smoothie. Even the prospect of dinner seemed a bit much so we just grabbed some snacks for the ride.

Thanks so much Barranquilla, I’ve had an absolute blast here! Loved it.